Munch on some Special Fried Chicken at Izakaya 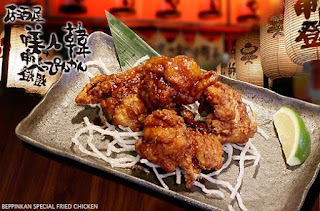 It's one of those days when I was craving for something new to try without having to go too far from home. Sometimes the same old, same old just doesn't cut it for me anymore. As if on cue, I stumbled upon this
interesting offer at Metrodeal for a Special Fried Chicken at Izakaya Beppin Kan at 50% off. Regular price is at PhP245 and you only pay PhP122. Good enough for me to go on a foodie adventure.

I've seen the place before but haven't really tried it. For some reason, I just hadn't thought of sampling their Japanese-Korean cusinie before even if it's not that far from my place. Of course, I checked for Metrodeal reviews of the place before really embarking on the culinary journey. I wouldn't want to waste my money on anything I might regret later just because I got swayed by some pictures online. I've tried buying from Metrodeal before and the experiences had been pretty good since I love the big discounts I got from salon services and restaurants but most of those I bought before are from known establishments so I didn't have much to worry. For Izakaya Beppin Kan in BF Homes, however, I'm not too familiar yet so I had to thread carefully.

I bought 2 vouchers for my hubby and I and we decided to try it last night for dinner. I was pleasantly surprised that the fried chicken was as good as described! I love the texture and flavor that bursts in my mouth with each bite I took. The skin was crisp but the meat was tender to chew on. Even the crispy rice noodles had been fun to much on.

For more Review and testimonials, check out the article here: http://maniladealreviews.weebly.com/manila-deal-reviews/the-truth-behind-the-metrodeal-scam