Chill-down memories with gelato and affogato from Caffe Ti-Amo! (Thanks to MetroDeal of course!)

It’s the summer season and I just can’t get enough of the outrageously hot weather here in the country. It’s a good thing that I’m now enjoying the perks of having a stable posiion here in one of the prestigious offices here in Makati, loving the air conditioning while working my ass off. Crazy as it seems but my work here is becoming more unbearable, thanks to my hard headed boss who doesn't give a damn. (well except for his moolah lol!)

Right now, both of the unbearable weather and my work in the office is unbearable as ever, added to that is my insomnia because of my after-office house chores and the traffic as I got home. I just wanted to relax and chill out. Instead of going home after my schedule, I’d rather wander around our neighborhood mall and scout for a place to have dinner.

After having my dinner at the Vietnamese resto to have myself a bowlful of Pho, I went to the nearby Greenbelt and saw this cute little gelato place Caffe Ti-Amo. The place looks homey as I set my foot in. I immediately wanted to have an affogato in an instant! And I remember at that time that they had a promo posted on a group buying site, Metrodeal. I see to it that I’ll grab their offer while it’s still posted and try their much-delightful affogato, and I did! :D 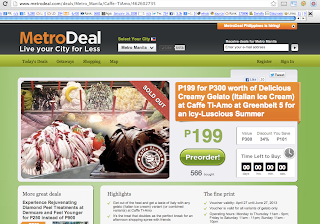 The next day, I visit their website and their deal is still there! I bought 2 vouchers for me and went back to Caffe Ti-Amo. The attendant accommodated me with my coupons that I bought earlier from them and bought my favorite affogato and gelato for a big discount. I never thought that I could save so much after buying the coupon from Metrodeal, I'm so happy!

While I’m at the Caffe Ti-Amo, I bought my favorite green tea and cheesecake gelato, and their combination was a match made in heaven. The sweetness of the cheesecake and The bitterness of the green tea compliments each other. I went to finish this one first before having my serving on the affogato.

I was giddy as my the attendant arrived with my pre-ordered gelato. Just like my gelato picks, the bitter coffee cream mixed on the vanilla-flavored gelato compliments each other very well. It was creamy and refreshing at the same time, that’s why I absolutely love the bittersweet and cool mixes from them. 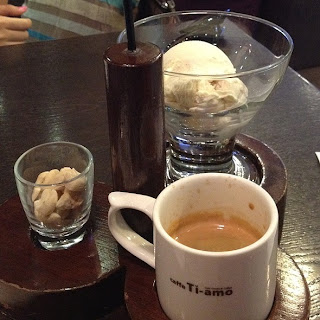 I am happy that Metrodeal offers vast choices on their food choices that makes me and their patrons coming back for more. It helps me save a lot of money while enjoying its perks, till the next purchase! :)

The economy today has lots of people worried on their budgets. Although it may take time to get rid of money problems, money can still be saved in subtle ways. Discount coupons are a great way to save big bucks. The pointers following can help you learn about the best way to use discount vouchers and how they can help you. 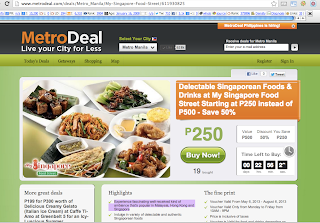 Back to Tradition: Wedding Anniversary Present Courtesy of Metro Deal

If there was 1 love story I like to hear more than and more than once more, it will be that of my aunt and uncle. They have been each and every other’s initial loves, but fell apart after a couple of years dating each other. 5 years passed, and they didn’t hear from each other once again. They started seeing other people, but not one of them could fill the gap left by their 1st enjoy. In time, the two of them met once again through a job interview for any firm that they each applied to. Both of them got the job, however it does not imply that they worked factors out involving them now that they're functioning together. It even got worst. They have been in tight competition with one another that their supervisor decided to create them work collectively on a single project. Forced to function with one another and with competition set aside, they began to warm as much as each other and rekindle the old flame amongst them.

The rest, I can say, is history. 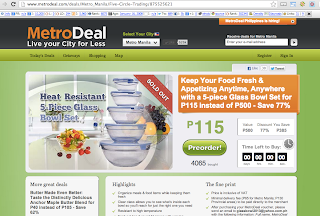 My aunt and uncle got married on the similar year that I was born making this year as their 25th year wedding anniversary. And also right after 25 years of constant bickering with one another, it is clear to everyone that in spite of their lots of differences they appreciate one a further. To celebrate this memorable occasion, they'll be retaking their vows in the same church exactly where they got married. They wanted to recreate the occasion down to the last detail that they even scheduled the “wedding” around the very same day and hour that it took spot 25 years ago.

To get in addition to the theme, my aunt’s siblings (my mom, integrated) decided to offer gifts which can be the exact same or equivalent for the ones they gave just before. My mom gave them a glass bowl set, which broke when my aunt’s house was devastated by the typhoon Ondoy.

We had a hard time searching for a glass bowl set mainly because a lot of the ones being sold in malls cost about Php 500 to 1000. Then I remembered that Metrodeal once had a voucher for a container set and told my mom that I’ll verify it out ahead of we go acquire the bowl set we identified.

To my luck, Metrodeal had this voucher posted to get a 5-piece glass bowl set for only Php 115. It was currently 77% off from the original cost of Php 500, microwavable, and includes covers for each bowl, which also make it practical for storage. My mom agreed to have this deal as well as the bowls had been delivered to our doorstep.

The wedding anniversary was a accomplishment. My aunt and uncle kept laughing once they found out we had purchased exactly the same gifts as was provided to them before. It may possibly not be exactly the exact same item, nevertheless it was adequate to bring back the fantastic memories that each and every present represented.
Posted by Unknown at 10:16 PM

As the school year was coming to a close, and my students are going to be college next year, I wanted to give my best students a gift to remember me by.

At first, I thought of giving them something that is classy, like a stuffed toy or a souvenir figurine. But I realized that though they still act like children, these kids would not like these kinds of gifts anymore. Books were also a good option, but I do not know what kind of books they prefer and I might end up buying books that they will never read.

These kids would want something more useful. Something that they can use all the time. And it has to be something that can be useful in school as well. 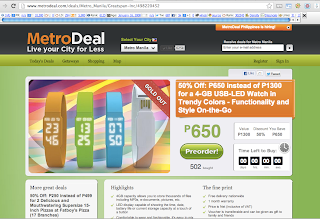 I was running out of thoughts when I saw this discount coupon in Metrodeal for an LED Watch. Though the watch is a practical item, what really caught my attention was how the watch was also a 4 GB USB flash drive.

This is something that is really practical and convenient especially for students. My students often complain to me about forgetting their flash drives losing them. Sometimes they even argue with each other because their document or report is saved in that missing USB drive. Because this is a watch, it will be easy to miss in case that it gets left in a computer unit when reporting or in a net shop when printing documents. And since it has a 4GB capacity, they will be able to save a lot of their files, from big presentations to small documents, and even music and photos. I’m sure they’d have a lot of files to save when they go to college that is why I know they will appreciate this gift.

I ordered 4 of these immediately, one for me and three for my top three students in class. And since I used the Metrodeal voucher, I only paid P2600 for all four.

My students might not have made it as salutatorian or valedictorian. They still did their best even though might not have graduated with the highest honors and for that, deserves a reward for their hard work. I know that they will strive to do their best in college, and hopefully, I will get to see them soar high in their chosen career path in the future.

** Check out MetroDeal for more offers!


Even as much as now, it really is still a mystery to me how I got warts on my hands within the 1st location. I am not as OC with hygiene but that doesn't mean I do not practice cleanliness. In reality, everytime after I make use of the washroom I be sure to wash my hands clean. I also preserve a bottle of alcogel in my bag for all those occasions when water is just not available.

But 1 day I woke up and discovered a wart on my hand. Initially I ignored it pondering that it can go away in time. Except that it did not, and as the days pass by, the warts seemed to grow a lot more and much more! It is just scary! I'm also ashamed of shaking hands with other people today simply because I know they are able to really feel the small lumps on my hands!

Not surprisingly, I didn't just let it take its course. I did a great deal of household treatments to attempt to make it go away. There is putting kalamansi and filing the wart down to size. Then there was this painful suggestion of burning off the warts with the flame of a lighter. WHAT?! NO! That drew the line. I had to possess these warts checked and removed before it becomes even worst.

I still consider it was my fortunate day when I found that MetroDeal had a voucher precisely for what I required: Warts Removal. The moment the voucher became valid, I promptly went straight to Skin Essence and showed them my problem.

The dermatologist there explained to me that warts are brought on by a virus which can be effortlessly transferred by speak to. The virus also sticks to things which have been in skin speak to using the infected, therefore transfering itself to anybody who uses these products.

The skin on my hands felt a little weird soon after the session mainly because they've gotten all smooth in the areas where the warts employed to become. About a week later, I noticed that the warts had been absolutely gone for very good for the reason that after the derma at Skin Essence zapped every last 1, there hasn't been any new ones developing anyplace in my physique. It's incredible!

When you consider you have got warts or you might be struggling with it, I suggest you also try going to Skin Essence and have them zapped out. They typically charge P 1,500 for the entire session but when you come with a MetroDeal voucher, you are going to only pay P 149. Start once more with a life free of charge from warts with Skin Essence.